The Redundant Search for a National Narrative.

On the surface it seems that historians have given up on the national project because creating any kind of national narrative has finally been recognized as an unrealistic project.  Yet there is still a obsession with defining what it means to be Canadian and a drive to create something resembling a pan-Canadian narrative, a history that speaks to everyone and leaves out no one.  Yet “Canada” in history rarely means all 10 provinces and 3 territories.  It means Ontario, occasionally Quebec is included as obvious site of cultural and political conflict.  The rest of the country rarely makes an appearance in the national narrative except when it is benefiting or frustrating the centre.
Take the two central debates in Canadian history, the liberal-order framework and the dead horse called “who killed Canadian history?”  The second debate is over in academia because the vast majority have accepted the fragmentation of the cultural turn and moved on to questions of what transnational and post-colonial approaches can bring to the field.  This does not stop the Dominion Institute insisting reminds us every July 1st that Canadians are woefully undereducated about their history purely because they can’t name key battles from the world wars or the highest mountain, or identify which province was named after Queen Victoria’s fourth daughter or endless other pieces of irrelevant trivia.  Yes Granatstein and friends the sky is falling, but we will survive.  The liberal-order framework debate is still active and interesting for the way its advocates and critics seem to be divided geographically.  Those who find McKay’s framework usefully – even if they suggest minor adjustments – are historians interested in Ontario, Quebec, and broad political, economic and intellectual issues. All things that fascinated the fathers of Canadian history back when the field was small enough to justify a national narrative.  The critics come from outside the centre.  They study women, labour, aboriginals, the regions outside Quebec and Ontario.  The topics that emerge from the cultural turn and forced historians to recognize there is too much happening in Canada for a national narrative to be effective.  This division hits an the underlying current in the liberal-order framework to enable a national narrative based on the assumption that Canada is a liberal society from coast-to-coast-to-coast.  It is an assumption that overlooks the issues that arose when the liberalism of Ontario was transported to regions, and the imperfect application of liberal ideas to the governance of these regions and their inhabitants (settler and aboriginal).  Without overtly stating it  or even intending to the liberal-order framework seems to point us back to attempting national narratives.

How is Canadian history angling back to national narratives?  If the Commission on Bilingualism and Biculturalism taught us anything it is that any attempt to define Canadian identity along set lines is counter productive.  The only conclusion the commission came to was that Canada is not bi-anything; it is multicultural.  Just what a country with identity issues needs, affirmation that they have multiple identities!  There is something about the now contested idea of multiculturalism that is instructive for those still hoping for a return to national narratives in Canadian history – looking for similarities is counter productive so it might be time to embrace difference as the common bond.

What makes the perpetual crisis of Canadian identity and the difficulties of finding and justifying national narratives of the country’s past interesting is that Canada has an amazing collection of national symbols that are not debated.  These symbols have been so carefully cultivated that a kid in the Yukon who has never seen a maple tree can identify with that ubiquitous leaf and someone in Toronto can build an Inukshuk in their yard to express their Canadianness and no one questions it.  Symbols like these and all the others that appear in beer ads and in government visual propaganda overcome the regional, cultural, political, and numerous other differences that make creating a universal Canadian identity so difficult.  It is not up to historians to create frameworks that makes an incoherent past make sense or reasserts a sense of national unity.  We have symbols that do that for us.  If you have any doubts go to Canada Day celebrations outside Canada and you will see all the worry of “Canadian Identity” is for nought.  This past July 1st I spent the afternoon in Trafalgar Square watching ex-pats play street hockey, drinking beer, listening to bad music and surrounded by “come visit Canada” messages.  Right before the gold medal game (Oxford vs Cambridge oddly enough) a guy in a Neil Young 2009 European tour t-shirt stood up and proposed a toast.  “I am not a lumberjack or a fur trader…” and immediately all the Canadians began reciting with him.  The Brits just looked confused.  In that moment, and in the singing of the anthem that followed, there was an amazing sense of unity around such trivial things as a song, a street hockey game, maple leaves, and bad Tim’s coffee.  Who needs the drama of the trying to pin down a national narrative or identity when our symbols do that for us. 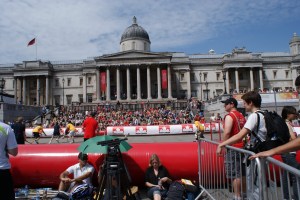 A reformed history phd student working as a public historian and looking for connections between museums and environmental history from the often freezing reaches of Canada (aka Edmonton).
View all posts by Lauren Wheeler →
This entry was posted in Canada, Opinion and tagged Canada, Nationalism, Opinion, Politics. Bookmark the permalink.

2 Responses to The Redundant Search for a National Narrative.